Finally I was ready and went on the Tupolev plane to Russia. Along on my side my 80 kg heavy equipment, my only companion for the following weeks.

Reaching Irkutsk via Moscow was quite stressful and in order to actually get to the starting point of the expedition some bribe money had to be paid. Before starting the expetition North of Sverobaykalsk, near Nizhneangarsk I have spent some time in Listvjanka to do some pre filming, check my gear and ice. When I was standing on the ice including my gear I felt happy. Exhausted by the journey I slept like a stone in my little villa, that’s how I named by small Hilleberg tent at - 20C°. 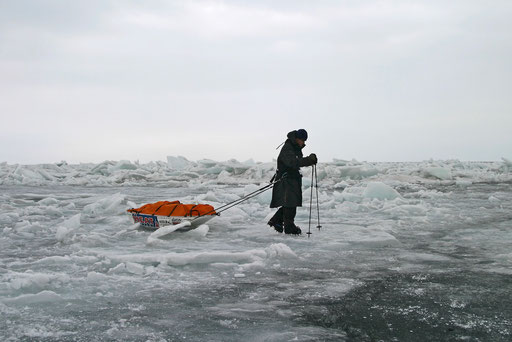 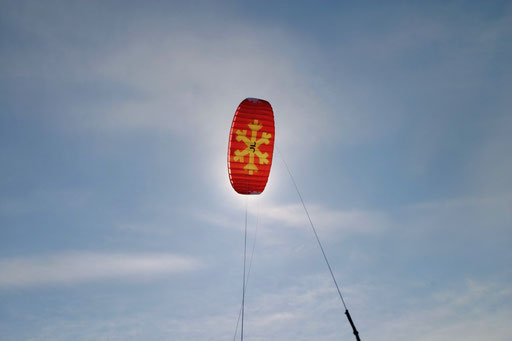 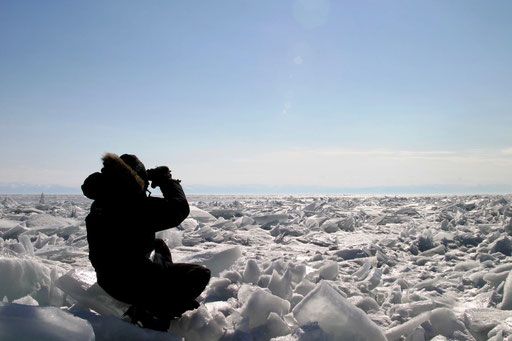 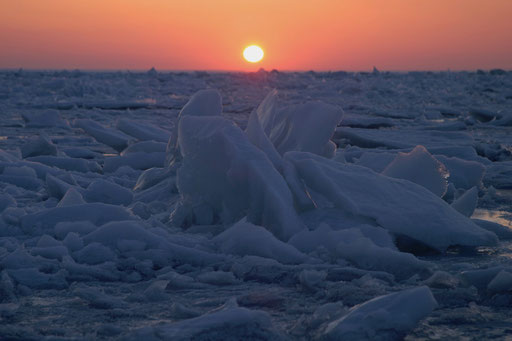 The next day, when I woke up I actually realized that I got to the place I have been dreaming of since years. The unique and mysterious Lake Baikal, in South-East Siberia. Optimal conditions on this day where an invitation to head South and start this exceptional journey on the ice.

Physically I was in best shape. The training hours of the past months did pay off.

Mentally there was a lot going on. On the one hand it was an indescribable and fascinating feeling to be on my own on the Lake Baikal. But on the other hand a feeling of humility outweighed especially in the beginning. The first two days I covered the distance with lowered head. When I was looking up I faced endless space and loneliness. Adding to this I was basically completely on my own, relying only on my gear apart from a security tracking device.

The first two days I could make 140 kilometres mainly by kite. At the beginning I was still very cautious when walking on the ice. I did know that the ice had a thickness of 150cm but sometimes it seemed to be only a few centimetres thin. In this originally volcanic area some warm springs still exist and they can influence the ice thickness. But I could not help it, I had to move in order to reach my goal. After some time the feeling of lonely vastness went by and I sensed absolute freedom and I was floating in my element. 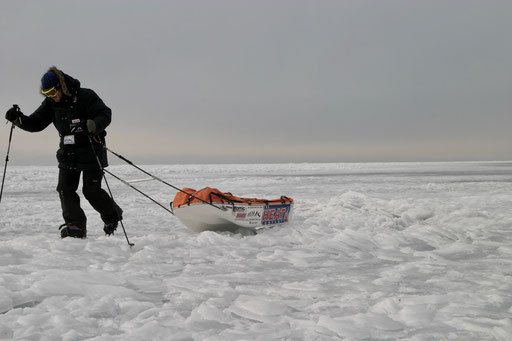 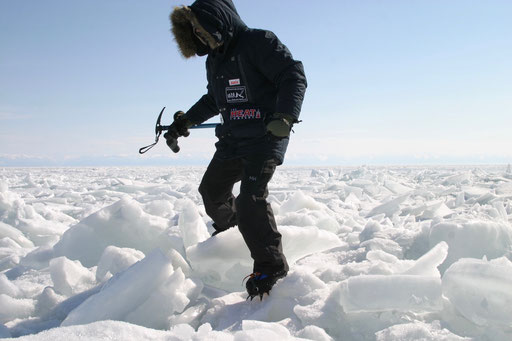 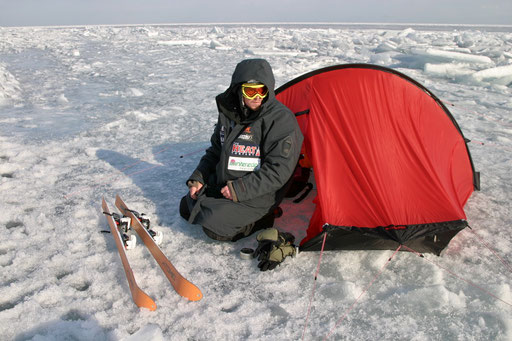 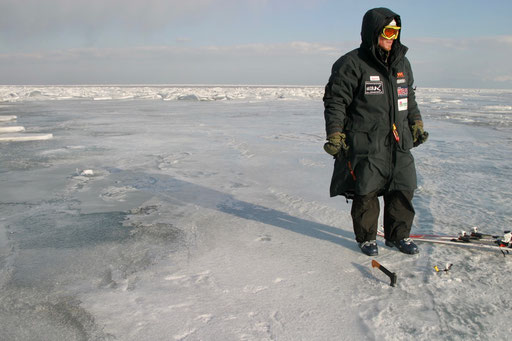 Before the sun set its first rays on the unreal ice formation I was already on my way taking advantage of the morning thermal winds.

I consequently stuck to my resting times of 40 minutes after every 3 hours of exercising to eat and prepare my material. Even though I was sometimes really in the flow and everything went smoothly I had to economize my energy in order to be ready for unexpected difficulties. On average I was 13 hours on tour of which 9 hours were in action. Shutting my eyes in one of the resting times was very risky. One time I snoozed away within seconds and wasted precious time.

After 3 days on relatively flat ice I was suddenly faced with ice barriers. The incredible masses of ice on this lake are in permanent movement. The sound of cracking and crunching ice accompanied me the whole time. Sometimes there was even loud rumbling and a new gap emerged. The ice walls on the lake Baikal can reach up to 2 meters and crossing them can become a difficult issue. 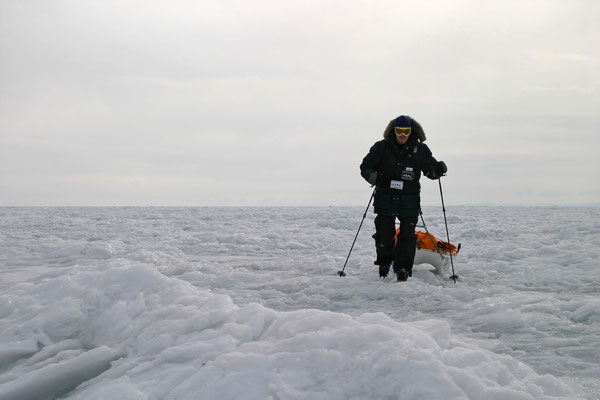 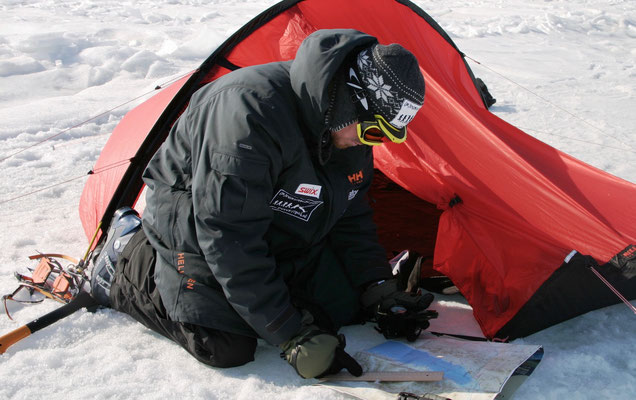 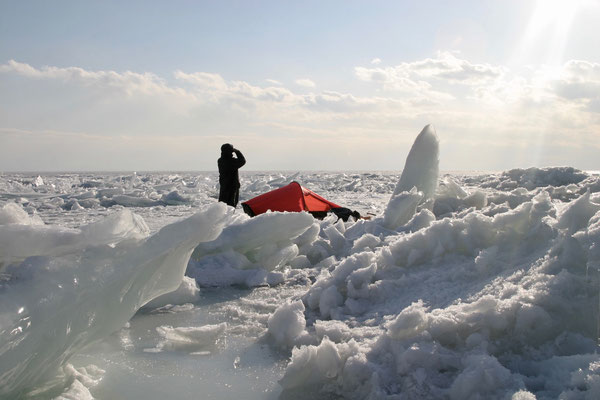 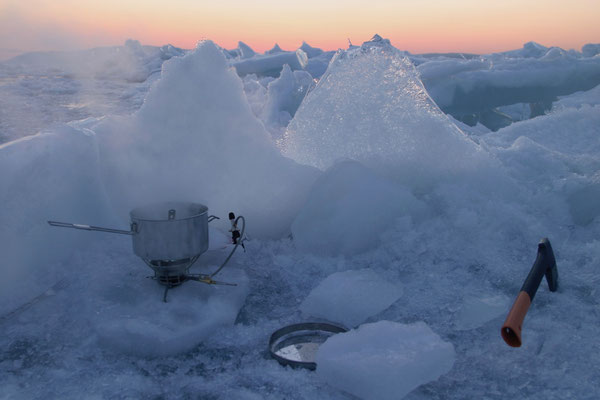 With the help of my binoculars I was able to find my way through these ice breaks but it was impossible to kite or cross them with my touring skis. For hours I stumped over these natural barriers, hiking shoes and climbing iron on my feet. Constantly ice plates were breaking underneath my weight and I had to take several breaks, as concentration slowed down fast. Sometimes I was lucky and the barriers were only a few kilometres long and I could continue with the kite. On the fifth day I was again crossing a barrier that seemed to be endlessly. Mirages made it look like the ending was 10 kilometres away. 12 hours later after ice spikes and plateaus and constantly thundering ice there was still no end in sight. A mental issue! What if the next 300 kilometres the ice is in this condition? 35 kilometres and 14 hours later my feet where finally standing on normal ice again. 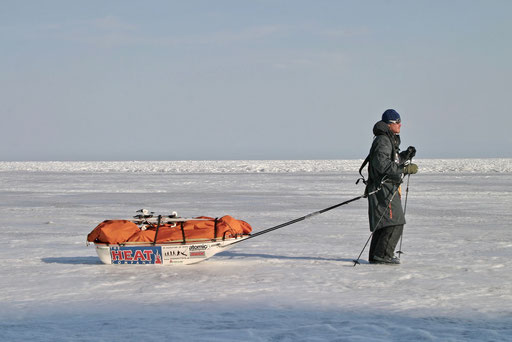 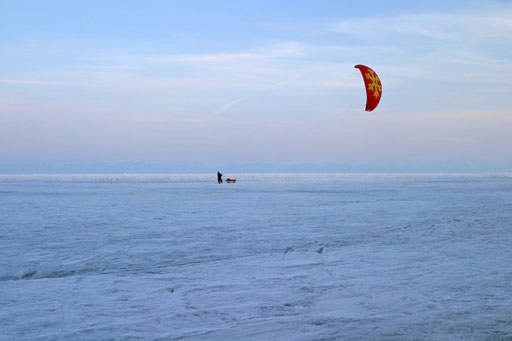 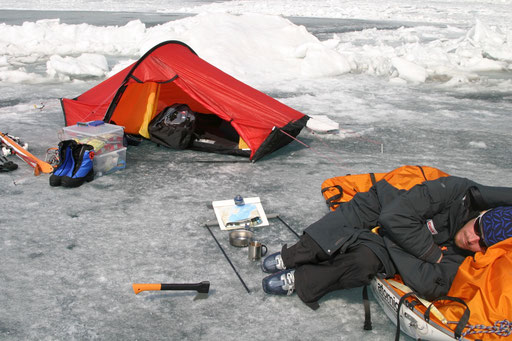 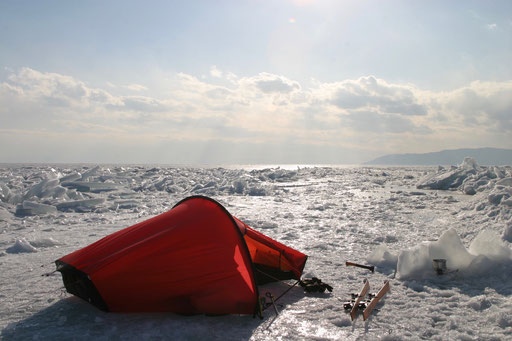 This is how it went on and on. Depending on the ground I moved forward by kite, touring skis or climbing iron. Changing permanently. It was possible to kite approximately 70% of the distance.

The ice on the Lake Baikal cannot be compared to normal ice. The spiky crystals permanently blunted the best material. Up to three times per day the skis had to be grinded and waxed with Swix.

I faced two highlights on the sixth day. One of them was crossing the point near the island Olkhon, the deepest point of the lake (1640 meters) and the other one was meeting the worldwide unique fresh water seals, the Baikalseals near the island Ushkaniy.

A detour of 20 kilometres in order to cross the ice barriers, trying to find a way to the Ushkaniy islands. Unfortunately I failed and had to head south a little disappointed.

The more I came South the warmer it got. Comfortable - 5 C° to - 10 C° depending on the wind, made cooking and sleeping a lot easer. But also the ice got thinner and thinner and made even more noises. On the 8th day a storm coming out of nowhere with nearly 100 km/hr and woke me up at 4 o’clock in the morning. 30 kilometres against the wind was the maximum I could make this day. When the storm weakened and the view got better I had a tremendous view on the border mountain range between the republic of Buryatien and the Mongolian boarder, the Khamar Daban mountains. 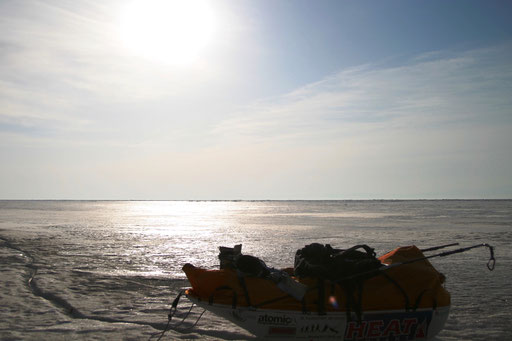 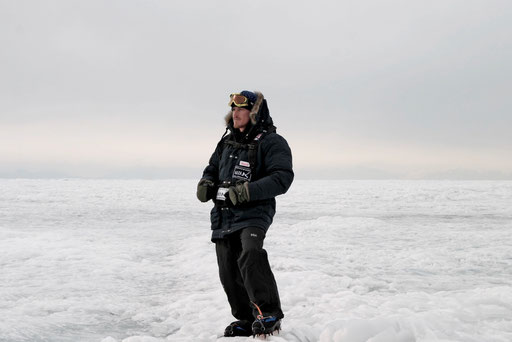 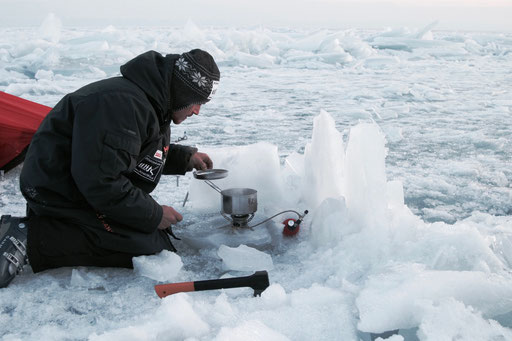 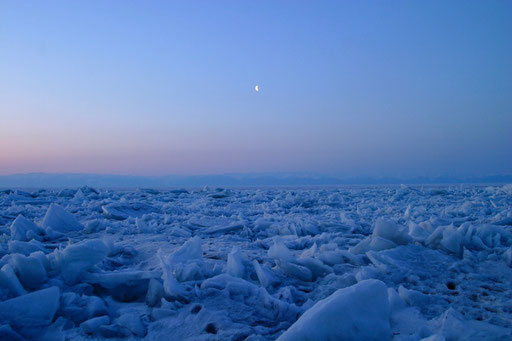 The ice got better and I was fortunate with the wind. So I reached the end of the Lake Baikal at arrived near Kultuk in time. I already feared it when I was on my way: the further I headed South the warmer it got and the less snow I saw. The air in the Baikal region is extremely dry and rainfall rare. I left my pulka on the ice in Kultuk and hiked with light material up Gramthuka, hoping to find a way over the Tunkinskie Goltsy mountains.

It was impossible to cross and continue the expedition with the sledge through the mountains and the grass. Without the right amount of snow I had no chance.

When coming back to Kultuk I had my first encounter with so called wolf dogs. Five of them surrounded my tent in a circle of 200 meters. Understandable as I was close to the coast. This evening I was too tired to head out onto the ice and I had to accept the fact that I will not be on my own this night. I tried to observe them until nightfall but I could spend quite a quiet night in my tent.

It took another 3 days to reach a small village near Port Baikal, my new goal. I enjoyed the remaining time on the ice as the journey was soon coming to an end. 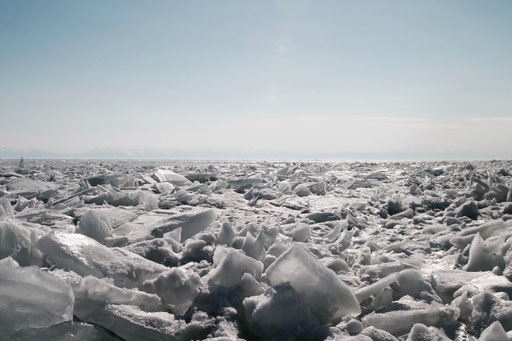 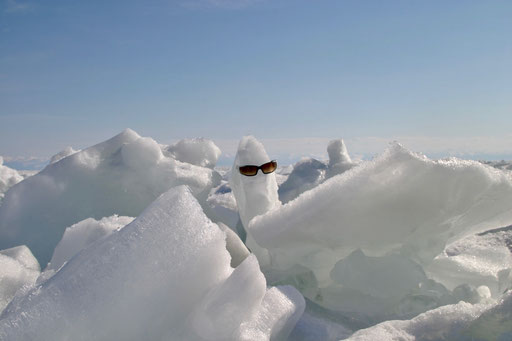 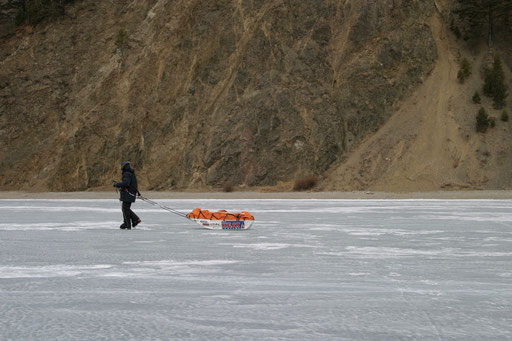 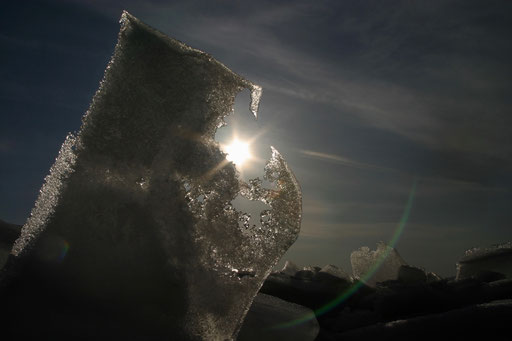 Summarizing I covered a distance of 1.080 kilometres with every possible condition. Temperatures slightly over 0 C° down to minus 25 C°, wind from 0 km/h up to more than 100 km/hr, constantly changing ice conditions and interesting situations that had to be managed.

The timing for the expetition was perfect. Some day later the ice was starting to melt.

7 kilos of body weight less I started the trip back to Austria only to find out it will be at least as difficult as getting here. A little melancholy came up having to leave the great Baikal.

Had I had a different goal and more food I think I could have managed to spend weeks on my sledge exploring this magic place on our planet.

This article can only give a bit of insight of this fascinating and indescribable region around the lake Baikal. 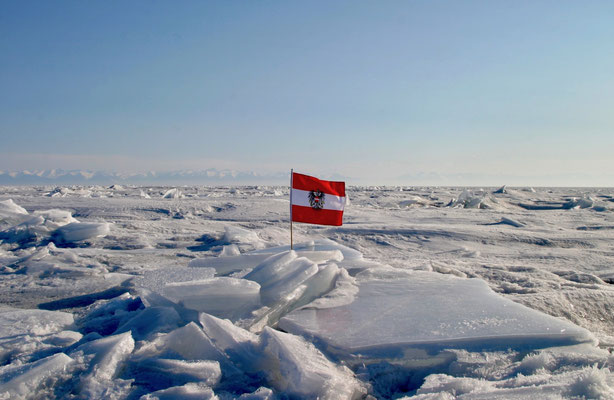 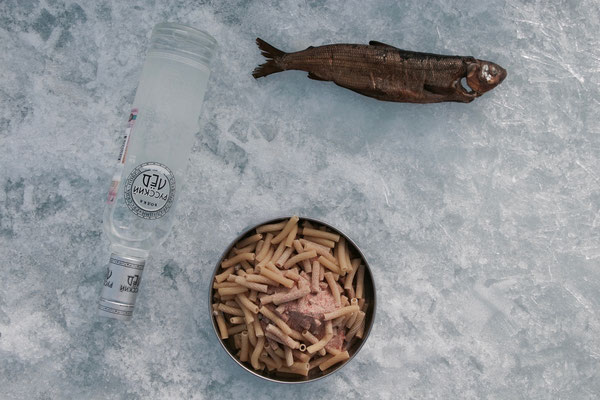 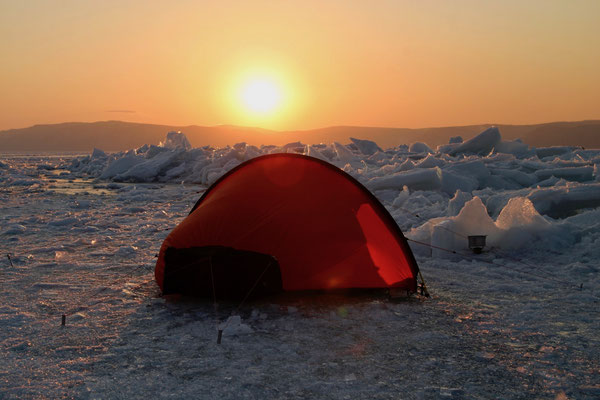 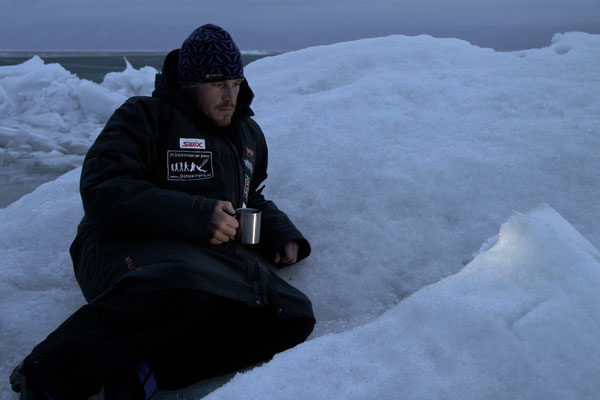 I for my part have discovered another exceptional part of our planet. However the next project is already slumbering within me.